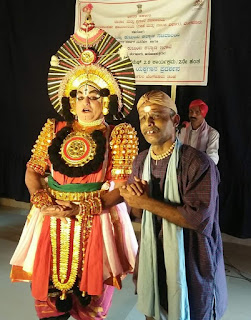 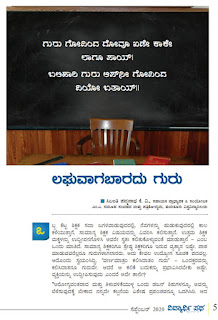 Lessons from a fruit and vegetable’s tussle for supremacy

Read it in Deccan Herald here.

The following is the unedited version.

Can an argument between onion and mango expose the irrelevance of class conflict and highlight the need for coexistence?  A rare Yakshagana titled ‘Palandu Charitre’ has answered this question. It has also provided a proof for the belief that any piece of art or literature will not lose its relevance if it survives even a century.

Palandu Charitre is a Yakshagana prasanga written by late Kerodi Subba Rao in 1896. Srimanmadhvasiddhanta Granthalaya, Udupi, has published this work in 1930. Interestingly, it is a plot narrating the arguments and fight between tubers and fruits over supremacy. Non-mythological themes are not new to Yakshagana, though it is considered a ‘religious art’ originated and evolved in temple yards. Though themes from Ramayana, Mahabharata, Bhagavata, etc. are prominent in this 500-year-old genre, Yakshagana has welcomed historical, folk and imaginary tales too long back.

Kasaragod-based Siribagilu Venkappayya Samskrutika Pratishtana, in collaboration with Kannada Natya Ranga, Hyderabad, performed the 125-year-old Palandu Charitre recently, exploring its newer dimensions. The prasaga had once been staged by Yakshagana exponent late Hostota Manjunath Bhagawat decades ago. He had also composed ‘Sasya Sandhana’ (means ‘treaty of plants’) for children based on Palandu Charitre.

The plot begins with Lord Shiva explaining Parvathi the story of Palandu (means onion in Sanskrit). The prasanga thus follows a flashback technique. There takes place a tussle between Chutaraja (mango, the king of fruits and vegetables) and Palandu (onion, the king of tubers) over the question of supremacy. An egoistic Chutaraja boasts of his greatness and ridicules Palandu for he does not have much freedom, being under soil.

After a skirmish, both parties approach Lord Sri Krishna, anticipating a judgement. Krishna asks them to rest in his guest house for three days, hinting that a solution will emerge on its own. As three days pass, Chutaraja and his companions such as jackfruit, pumpkin, ash gourd, and lady’s finger, start decomposing, while Palandu and his companions such as radish, elephant yam and sweet potato start sprouting.

Krishna gives a re-birth to Chutaraja and enlightens him of his limitations. All fruits, vegetables and tubers are convinced that each living organism is distinct of its qualities, and no one is superior or inferior by nature.

“A Yakshagana prasanga becomes special because of the artistes. Though it has a simple plot, it spoke about the irrelevance of class conflict, feudal mindset, and the need for human coexistence since the artistes could find a unique message in it,” says scholar D. S. Shreedhara.

“You (mango) are one whose essence is known after peeling the skin; and you (onion) are the one whose heart is known after removing layers one after another” – that is how Krishna (performed by Vasudeva Ranga Bhat) visualizes the nature of Chutaraja and Palandu.

“One can be of light-weight being at certain height. At the same time, a heavier one can also be at a high position. One’s value need not be judged just for the reason that it is at a higher place,” Krishna says at another point, indirectly criticising at the egoistic nature of mango.

He concludes by saying that “Good quality is to admit the other person’s unique qualities without disregarding the self. If someone is at a higher position, he should bend himself and be accessible for others. Nobody is superior or inferior in Nature’s creation.” The roles of Chutaraja and Palandu were performed by Radhakrishna Navada Madhur and Permude Jayaprakash Shetty respectively.

According to senior artiste Radhakrishna Kalchar, the performance became special because of the interpretations by the artistes, which were very relevant to the human society.

Scholar Kabbinale Vasanth Bharadwaj said Kerodi Subbarao who lived between 1863 and 1928, was one of the prominent writers of modern Kannada literature.  He was a known person in literature, yakshagana, journalism, agriculture and social service. According to writer B. Janardana Bhat, Subba Rao was editing Sri Krishna Sukti, a monthly literary journal in Udupi as early as 1906. With command over Kannada, English and Sanskrit languages, he also authored several works, including Yakshagana prasangas like Jarasandha Vadhe and Pandava Digvijaya.

Ramakrishna Mayya Siribagilu, a renowned Yakshagana Bhagavata, who was responsible for the performance, said the restrictions caused by Covid-19 allowed the Pratishtana to experiment with innovative ideas.

“When I came to know about a rare prasanga, I thought of bringing it on stage. However, due to the restrictions we could not perform it in public. Therefore we recorded the performance and broadcast the same through YouTube and other social media. We could reach thousands of viewers across the world,” he explained. Thus, the Yakshagana has shown the possibilities of integrated use of art and technology too.